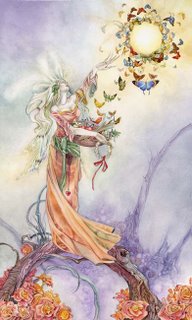 I am a wind on the sea
I am a wave of the ocean
I am the roar of the sea,
I am a powerful ox,
I am a hawk on a cliff,
I am a dewdrop in the sunshine,
I am a boar for valor,
I am a salmon in pools,
I am a lake in a plain,
I am the strength of art,
I am a spear with spoils that wages battle,
I am a man that shapes fire for a head.
Who clears the stone-place of the mountain?
What the place in which the setting of the sun lies?
Who has sought peace without fear seven times?
Who names the waterfalls?
Who brings his cattle from the house of Tethra?
What person, what god
Forms weapons in a fort?
In a fort that nourishes satirists,
Chants a petition, divides the Ogam letters,
Separates a fleet, has sung praises?
A wise satirist.

—This comes from a very early history of Ireland.

“The Milesians came to Ireland from Spain, about 1530 B.C.E. and displaced the Tuatha de Danaan who had control of the island at the time of their arrival. Three druids, Uar, Eithear, and Amergin, led the Milesian migration to Ireland. Amergin was among the most influential of the Druids, referred to as the first Druid of the Gaels in Ireland in the Book of Invasions.

The Milesians landed first at Kerry and proceeded to Tara where they met the Kings of the Tuatha de Danaan who claimed control of Ireland at the time.

The Tuatha De Danaan objected to the arrival of the Milesians, so Amergin agreed that he and his companions would leave the island and land again. The De Danaan took advantage of this good faith offering by having their Druids raise a fierce storm that scattered the Milesian fleet. Amergin used his druidic skills to calm the storm and the Milesians landed again. This time, Amergin’s first words upon landing were the poem we know today as the Song of Amergin. Having landed in Ireland on Beltaine, the Milesians defeated the Tuatha de Danaan three days later and became the dominant force in Ireland.”

——-to me this poem and the experiance connected with it magnifies what it is to be a druid, to be a celt, to have an awarness and relationship with mother earth that it respects you as you respect it. It is what I strive to have, what I started on this path to achieve, a oneness with our first beginings, mother earth and the spirits that dwell within.